God is good for giving me the opportunity to share His message to the newest members of CFC Cavite 2a2 as the last speaker of yesterday’s Covenant Orientation..!

From what I understand, being a speaker in CFC is something like being recognized that you are following the examples of Christ. It is only natural that for some of us, this is something sought after.

Training to be a Speaker

I have attended Speakers Training last August 2013. It is November 2013 when I have been requested to deliver the teaching on “Our Christian Culture in Couples for Christ” which is Talk 4 and the concluding part of the Covenant Orientation teaching day.

Or so I thought.

It was later on explained to me that I was to prepare only as the fall-back guy, for the original speaker was trying to free his schedule at the time, and was successful to do so. In short, I was not assigned to this talk.

4 months later, that is the right time. For God is never too early, never too late. All according to His plan.

4 months earlier, I had already been preparing for over a week. I even recorded a “clinic” voice message stored in my handheld device, so I would be able to listen to it wherever and whenever I wanted to.

I strongly believed that I had been ready as early as I could be. This is the first talk I am to deliver, and I want to be an effective witness to the Lord’s work in my life.

Part of what I learned from the training for speaking in talks, was that the speaker’s sister wife must have time to share something that confirms the lessons being shared by her brother husband. I told this to Sis. April, my wife.

That time, I am excited. I know I have been studying the Scripture. I know that I am regularly praying.

I know that the household members we are caring for, are experiencing the love from the chapter community through our leadership.. for these people started as complete strangers to us, but have been faithfully attending the prayer meetings. One even told me he is curious about how we pray, because he is convinced he is feeling it when we pray for him and his family.

Excitement Should be Shared

Yet my excitement during November’s first week was not felt by Sis. April. In fact, when I was advised that the first-requested speaker found a way to be available on the scheduled date for 2013’s last Covenent Orientation day, Sis. April felt relief.

I was assigned the team leader. I had the mini-talk to share, and introduced the four speakers when each one took his respective turn. The audience at that time included our household group members.. this is their first attendance of a teaching of this kind, after graduating from the Christian Life Program earlier in July.

This month of November in 2013, I have been given the assignment as the “Chapter Encoder” which is a relatively new service position, in accordance with recording membership information in an online database system.

A new excitement engulfed me..! We have only been officially assigned as newest household leaders last July, and now, another way to serve the Lord through the community has been entrusted unto us.

My wife and I enjoy sharing God’s works to others. We enjoy being with people. And we have good experience both individually and together, about leading. It is but natural that we enjoy shared Christian leadership when we are assigned to a new household in CFC.

Yet I also enjoy marketing via the Internet. It was November still, when my boss told me he was pleased with my performance (I am working in a web-based business-solutions company for more than 6 months this March 2014).. translating into I am qualified to avail the housing assistance our company offers.

It was December already when I gained access to the encoding “backend” of our chapter group’s database. That same month, we have confirmed that a new member of the family will be coming soon!

On Gifts and Trainings

In light of all things happening, we are able to talk things out and formulate plans accordingly. Sis. April is convinced that this is the break she is asking from the Lord. I am convinced that we must have no fear when it comes to trying to follow God’s plan for our life.

Even if Sis. April is not very much interested in what I do as a digital marketer, she is very supportive. She is entertained about how I try to explain things to her, about how I am happy being able to contribute to the overall production of our company.

The teachings or trainings we have been attending about the One Global Database system, have given me deeper understanding about what the Couples for Christ as a whole is trying to get at. Having access to the database profiles of our chapter members, opens up analysis and planning in my mind, that at times render me sleepless. After all, I am trying to track things which may be tracked by this technology.

And in the middle of it all, God is trying to tell me something.

If you enjoy what God is assigning you to do, this is your “gift.” If you are challenged by your assignment, this is “training.” Lessons learned. 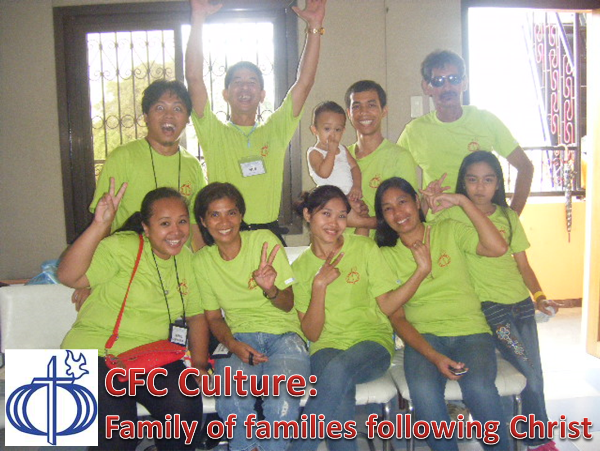 What CFC Culture is All About

Fast forward to the first Sunday of March 2014. I am now the only speaker requested to deliver Talk 4 of the Covenant Orientation.. the same talk I have been preparing for, for the past 4 months.

At this time, Sis. April is about 5 months into her pregnancy of Noe’s sibling. And she is more than willing to testify as the co-speaker, to share her life. She briefly shared how she took care of our son and me who was both sick for most of December, and how the Lord responded to her prayers for help by giving us blessings in different forms this Yuletide 2013.

I have been prepared as God’s witness earlier, I believe. But we are talking about culture here. And culture is one thing which cannot be individualistic.

I also thanked her for sharing, for doing her part in this shared-leadership for the Lord. We may not have been able to do this if we have not tried to follow Christ on a daily basis. After all, I regard culture as something which cannot be faked.

To God be All the Glory!

Prayer to the Holy Spirit

Holy Spirit, Thou who make me see everything and show me the way to reach my ideal; You who give me the divine gift to forgive and forget the wrong that is done to me and who are in all instances of my life with me. I, in this short dialogue, want to thank you for everything and confirm once more that I never want to be separated from You no matter how great the material desires may be. I want to be with You and my loved ones in Your perpetual glory. AMEN.

If you pray this 3 consecutive days without stating one's wish, after the 3rd day, your wish will be granted no matter how difficult it may be. Promise to publish this as your favor has been granted. ~ The Word Among Us Magazine

Prayer to the Sacred Heart of Jesus

MAY THE SACRED HEART OF JESUS be adored, glorified, loved and preserved throughout the world, now and forever. Sacred Heart of Jesus, worker of miracles, have mercy on us.

Say this prayer nine times a day, by the ninth day, your prayer will be answered. It has never known to fail. Publication must be promised. ~ The Word Among Us Magazine

Contact me today if you believe I can channel God's love towards your teachings and gatherings!

Seek and You Shall Find

You May Have Missed..

Choose One and Pass!

Your Bro. is Google verified..!